When the Downtown Alliance first launched its Wi-Fi network in 2003, it was the city's most extensive free, public Wi-Fi initiative and over the past 16 years it has grown to cover all the major thruways and is accessed more than a half million times each year.

"Our beautiful public spaces are host to hundreds of programs and thousands of parks users. We're delighted to have partnered with the Downtown Alliance to strengthen ways to keep our community connected as they enjoy all the Battery Park City has to offer," said BPCA President & CEO B.J. Jones. "We invite you to enjoy this free service. Stay tuned for more to come!"

"Access to information is crucial in today's connected world and as part of our mission to support Lower Manhattan we feel it's vital to provide free and easy Wi-Fi access to as much of the neighborhood as possible," said Downtown Alliance President Jessica Lappin. "We thank the Battery Park City Authority for working with us to bring this service to all of the residents on the West side and we look forward to seeing more selfies of residents living their best life in Lower Manhattan."

BPCA first installed Wi-Fi access points covering Wagner Park in 2008-9 and sections of Rockefeller Park, Teardrop Park and portions of the BPC Esplanade, in 2012. The #DwtwnAllianceFreeWiFi network now brings gigabit-speed service to the entirety of each of these parks and their surrounding areas. This expansion was made possible by support from BPCA, while support for the existing network is provided by Wilmer Cutler Pickering Hale and Dorr LLP (WilmerHale), a leading international law firm located in Lower Manhattan.

For more information on the network, visit: downtownny.com/wifi 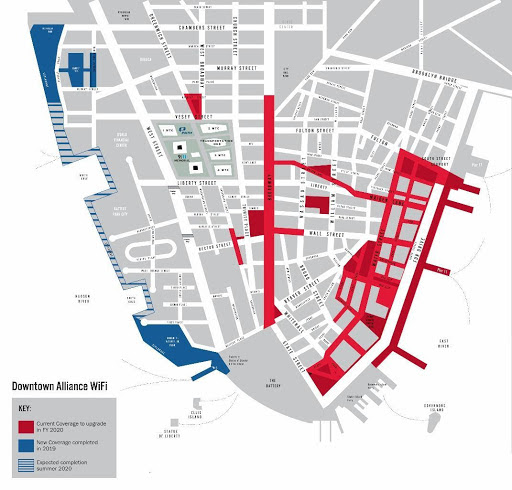